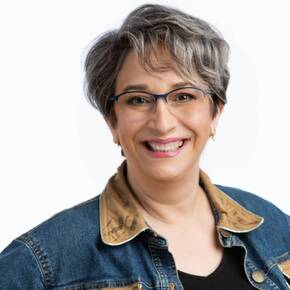 Dr. Gigi Louisa Johnson “connects the digital dots.”   Her work at the Maremel Institute, Rethink Next, and in the past at UCLA, focuses on how we can create intentionally healthier futures — as individuals and together — in a changing world.

Through the Maremel Institute’s various programs, Gigi creates programs to explore where belief, technology, education, creative work, and social/community ecosystems are going in a digitally accelerated age. At Maremel, she has produced executive programs with universities and companies, educational web series, podcasts, video oral histories with innovative leaders, and transformative talks at thought-leading conferences across the world.  She has counseled leaders from tech and media companies on future trends and new markets. She speaks virtually and around the world on digital transformations — both of the past and in the extended future.

Through the non-profit Rethink Next, she also is launching collaborations on the futures of creative work in local communities.  In 2020 and 2021, she co-launched the Amplify Music 25-hour virtual conference with 45+ great partners, exploring how local music communities were changing globally across the pandemic and focusing on emerging leaders and organizing.

For more than 20 years, Gigi created programs in industry transformation and taught future leaders at UCLA.  Gigi founded UCLA’s Center for Music Innovation, where she was the Center’s Executive Director for four years.  She taught courses in music industry transformation, marketing, and organizations for more than a decade at the UCLA Herb Alpert School of Music.  For eight years, she taught digital media and disruptive technologies courses at UCLA Anderson, as well as the University of Navarra in Pamplona, Spain; Columbia College; and Higher Colleges of Technology in Abu Dhabi.  From 1999 to 2005, she ran a variety of thought-leadership programs at UCLA Anderson, including its Entertainment and Media Management Institute and Applied Management Research/Field Study Program.

Her for-profit background includes being SVP/General Manager of two video-on-demand channels at Studio 4 Networks and SVP/Managing Director at Bank of America. As a corporate banker in Bank of America’s Entertainment/Media practice, she financed mergers and acquisitions for entertainment conglomerates, movie studios, theatrical exhibition, radio and TV broadcast stations, publishing, cable television, theme parks, and wireless telecommunications. In addition, she has worked for leading advertising and public relations firms in media, as well as at a major studio in television finance.  She also has worked with a variety of non-profits and trade associations in advisory and leadership roles.

Dr. Johnson received her doctorate in educational leadership and change, focusing on media studies, organizational change, and technologies, from Fielding Graduate University.   She received her MBA in finance and accounting from UCLA Anderson, and her BA in Cinema-Television Production from the University of Southern California.

We use cookies on our website to give you the most relevant experience by remembering your preferences and repeat visits. By clicking “Accept”, you consent to the use of ALL the cookies.
Do not sell my personal information.
Cookie SettingsAccept
Manage consent