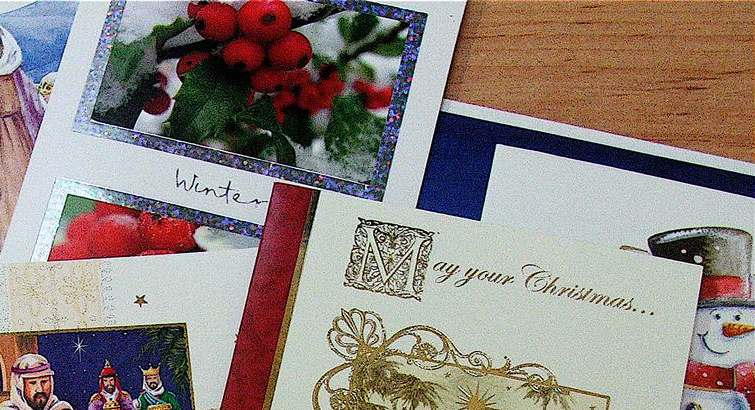 As a socio-technology fan, I am intrigued by the morphing of holiday cards and letters with new technologies.  This, of course, has been changing for quite a few years.  Desktoppublishing has brought us pictures of our

lives within cards and letters for a while now.  They almost are like the old portrait paintings, where you were pictured with your favorite objects that described to the future who you were by the things you liked.  Here, we have pictures with kids and musical instruments, families on trips, and all the trappings of “who we are” in evidenced pictures.

Holiday greetings of the past

This year, I began to get holiday digital cards around Hanukkah from my Jewish friends, which became the harbinger of the full holiday season to come.  I got a lovely anime self-portrait by one of the daughters of one of my long-time friends, superimposed on their home.   Charming and original – and very current tech.
Then came the deluge of emailed jpgs to my business email from a swath of companies that I’ve never done business with, reminding me that they are thoughtful and cool this time of year. Who are these companies?  What did they think I would do in getting their email?  “Boy, I really did need that mailing list service — I should give them a call?”
Now, as we get closer to Christmas, Iam getting all of the digitized photo cards.  In the recent past, creative- and technology-focused friends have created marvelous montages and nearly homemade lovelies that were a mash up of design and digital photography.  This year, other friends seem to have found companies to do this for them.  LOVELY choices, but an intriguing mix of the holiday card and letter, with professional services mixed in.
Here’s my headscratcher of the season: two nag holiday letters.  Two female holiday letter-writers (who shall remain nameless) took the opportunity of their holiday letter to gripe at their husbands through the text.
We use cookies on our website to give you the most relevant experience by remembering your preferences and repeat visits. By clicking “Accept”, you consent to the use of ALL the cookies.
Do not sell my personal information.
Cookie SettingsAccept
Manage consent