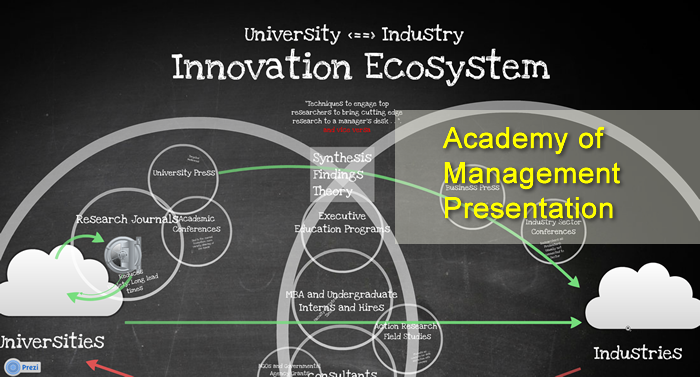 Academy of Management on Innovation

We enjoyed sharing the following slide presentation with the Professional Development Workshop at AOM 2013 in Orlando, Florida within an overall session called “Translating Scholarship into Practice: How Can Scholarly Research Be Translated Into Practice?”  It also can be found at Prezi.com at this link.

For the past two weeks, we have been running presentations and workshops on education in the cloud and digital education in creative industries.  I’ve also been going to a variety of conferences, including heading today to Billboard FutureSound in San Francisco.

At last night’s event, several of us began to compare notes on all of the digital learning companies that we see launching.  One of our advisers, on the investment side, said that he had two companies just pitched to him yesterday.

What are the barriers to entry in this business, now that you can perch your new learning environment on flexible cloud-based tools and infrastructures-in-the-cloud?  Audience?

For many years, I have taught part-time at UCLA.  Every year, friends have come to me saying, “What I really want to do is teach.”  I have told them how much it pays (and they are taken aback), and they still want to do it.  UCLA does get picky, and has turned down many fine VPs of divisions of companies because they lack both the right credentials and teaching experience.  UCLA Extension provides a wonderful alternative, within their structure and fine teacher training, for a lot of this content to get out into the professional worlds.

Now we are mixing the abundance of User Generated Content with all of this unmet teaching demand.  I spoke with two start-ups last week.  Each is “allowing” the teaching faculty for their programs to invest all of their own time and recording energy to create their classes, and “only” taking 50% of the revenue for letting them teach on the platform.  Other older entities are more gracious to the teachers (some keeping 15-30%), but all of these seem to put the production risk onto the eager teacher with no guarantees or advances.  Many seem to offer deals to learners with deep discounts to drive continuing interest in the platform.

There are some great programs that do have nice revenue streams for the teachers online.  The newer models, mixing new abundance into education, seem to be taking willing content producers and promising them lights to shine.

Perhaps I’ll be less cynical when I see review structures come out and customers not flock to the next new freemium educational product.

Shared content and services on the Internet is not new.

To the consumer, SaaS is the public face to their cloud-based media lives and habits.  Consumer products—such as Netflix, Dropbox, Spotify, Tumblr, or other connected services—might be living on Amazon IaaS cloud-based servers and a connecting PaaS platform.

These three drivers have set the stage for our more complex current media environment of 2012.

Due to the breadth of content available, legally and illegally, consumers have built up large portfolios of existing digital content across a variety of devices and hard drives.  They also have accumulated years of DVDs and CDs.  The ease of saving and storing this content previously was limited to hard drive and shelf space.  Shelf space has not grown in most homes, but the low cost of hard drives has let consumer build up large amounts of digital stuff.

Meanwhile, consumers have owned enough hard drives over time to realize that they do not provide infinite storage life.  Hard drive failure rates, estimated in mean time between failures in the millions of minutes, have shown in testing to be 2-4%/year, and even as high as 13% in a 2007 Carnegie Mellon study[iv].  In addition, digital stuff is now shared across home networks, computers, individuals, and devices.

Training and Converting our Behavior and Needs

As noted above, online SaaS tools for engaging media have been around for a while.  Three drivers are moving consumers into more comfortable adoption: work, tablets, and ease of start-up alternatives.

[i] National Institute of Standards and Technology’s (NIST) working definition of cloud computing, the 16th and final definition has been published as The NIST Definition of Cloud Computing (NIST Special Publication 800-145).

“Storage”: An interesting word in the context of “digital stuff.”  Like the word “collect,” storage implies that it is our “digital stuff,” that we have ownership rights to it.

Storage, as a social metaphor, brings with it context from our daily, physical lives. It may bring to mind Public Storage units, areas under overpasses where we put the detritus of our lives: mom’s sofa, the wagon wheel coffee table that we fight over, or three rooms of furniture as we downsize homes.  Storage bears echoes of George Carlin’s 1986 comedy routine about stuff to hold our stuff in.

Email has become a “gateway drug” for the cloud, training users to expect abundance of digital storage.  Digital storage was framed for many years as precious, to be used wisely.  Previously, companies chastised their employees about using too much e-mail space through automated warning messages.  Expectations have escalated since 2 MB in free email storage was offered by Hotmail in 1996.  Yahoo started at 4 MB in 1997, and Gmail started its beta with 1 GB in 2004.  Yahoo joined in with unlimited storage in 2007, and Google upped the game soon after with its “Infinity Plus One” storage plan, which has grown individual storage now to more than 7 GB for free unlimited storage for Gmail[i].  Hotmail has since moved to “ever-growing,” nearly unlimited storage, continuing to change social norms about digital storage expectations.

Entire business ecosystems have sprung up, dealing with sharing, backup, and cloud storage.  These tools have shifted home and business users to consider storage issues such as ubiquity, mobility, sharing, multiple devices, and permanence.  Despite these roving ambitions, most people’s work and social habits have not kept up.  Products have launched to help us filter and gather our email, though the majority of users still let the content swamp us out and push into unfiltered folders.

2011 was a year of many media “cloud” storage toolset launches, with more solutions to this “problem” on the horizon.  Cloud-based content storage now reaches into consumer lives as well as business services.  Digital media is a growing percentage of our personal digital storage.  As a digital culture, we also are rethinking storage as to digital media.

This transition brings with it a series of questions about this “problem,” and about the relationships between the consumer and cloud-based media storage in the future:

The music and book media sectors have been facing these issues head-on.  Their company leaders have been forced to rethink what the context and containers for our media content mean in an environment of abundance.  They have been rethinking books and music in a terrain of fluid data and scarcer time.  Other sectors, including video and even education, may find ideas from looking to other media platforms and sectors for pain points, challenges, and new business models.

This blog post from Maremel’s white paper will continue in three steps: 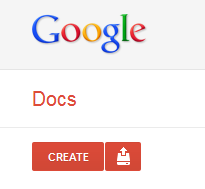 How to Start with Google Docs

Some of us at Maremel have been setting a non-profit organization up for cloud-based collaboration.  To get them all on the same page,  we helped them move their shared work documents to Google Docs.

Movement screeched to a halt.  Quite a few group members needed a tutorial-style boost into Google Docs — just the basics to get started — though did not raise their hand directly that they didn’t understand the basics.

This need prompted us to return to the web for inspiration.  We took a look at the currently available tools online to understand Google Docs from scratch.  We hope this might be helpful for some folks who might not be comfortable otherwise getting started by trial and error.

There are a host of other YouTube videos with instructions.  Just search in YouTube on your specific question, which can be anything from how to use Forms (http://www.youtube.com/watch?v=IzgaUOW6GIs&feature=relmfu), details on how to use spreadsheets and documents, and how to use Google Docs in more specific situations.  You can find a host of videos also within the Expert Village YouTube Channel: http://www.youtube.com/user/expertvillage/search?query=google+docs .

We’ll be adding some digital basics to our blog in the future, just to brush us up on what is available, as well as what the current state of easy learning resources is online.